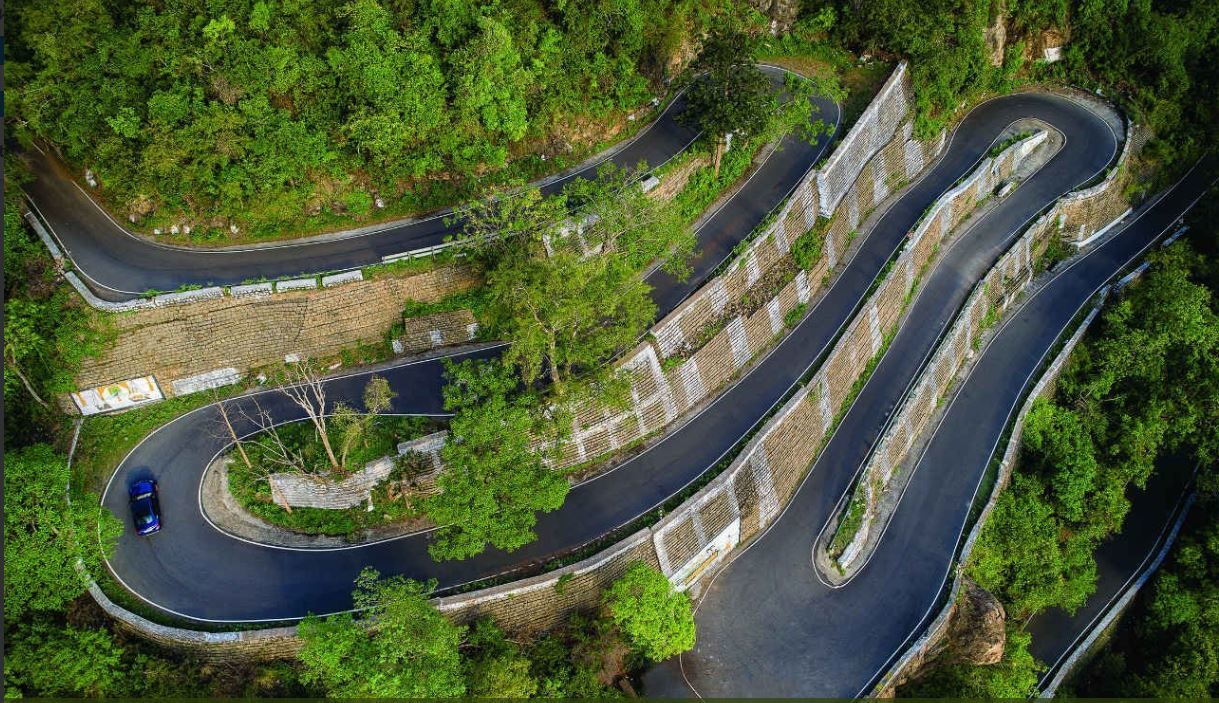 Origin of the Name:

The Kolli Hills are presented in multiple works of classical Tamil literature such as Silappathigaram, Manimekalai, Purananuru, and Akananuru. The region was ruled by Valvil Ori around 200 CE, who is praised as one of the seven great philanthropists of ancient Tamil Nadu. His valor and marksmanship are sung by several poets, and his exploits are a popular part of folklore. Ori is said to have killed wild animals such as a lion, bear, deer, and a boar with a single arrow. The hills are said to be protected by Kollipavai also called “Ettukkai Amman”, the local deity. According to legend, the sages chose Kolli hills when they were looking for a peaceful place to do their penance. However, the demons invaded the hills to disrupt the penance when the sages began their rituals. The sages prayed to Kollipavai, who according to the myth, chased away the demons with her enchanting smile. The Kollipavai Temple is still worshipped here and her smile is respected by the people. The mountains often come across as an eerie place in contemporary tales due to the unexplored and less traveled terrain. The locals said that even at some places one can hear the presence of Saptha Kannigal, (The Seven Virgin Angels).

Kolli Hills is one of the most mesmerizing mountain ranges situated in Central Tamil Nadu and spread over the Namakkal district and Tiruchirapalli district of India. It is also called Kolli Malai in Tamil from the background of the Goddess who protected the entire locality. The mountains are over almost 1000 to 1300 meters in height and cover an area of approximately 280 km. Additionally, these hills are a part of the Eastern Ghats, which is a mountain range that runs mostly parallel to the East coast of Southern India.

If you are planning to visit tourist places around Trichy? Kolli Malai Hills will be one of the wonderful places to visit.

One must pass the strange Hairpin bends in order to reach the mighty mountains for a spectacular view. Kolli Hills road comprises 70 dangerous yet thrilling hairpin bends. Young people usually prefer traveling by bike with their friends especially for a weekend getaway as it would be an unforgettable experience with enjoying the beautiful sky, the smell of the herbal plants, and the tricky path towards the destination. People can also reach the place by car, bus, and train. Kollimalai Hills is hard to drive due to its numerous hairpin bends, but it’s not too dangerous by ghat road standards. The most tricky section of the road is an ascent that starts from Karavalli and ends at Solakkau. One must have all safety measures while traveling and ensure a safe journey with their family and friends.

Kolli Hills in Tamil Nadu can be visited all around the year apart from the month of January because the temperatures drop down considering the altitude of this picturesque destination. In all the other months Kolli Hills weather is quite pleasant. Hence, the most effective time to go to Kollimalai is from February to December. Also, since there is a unit of a restricted range of attractions, a perfect period of two to three days would be enough to explore the most effective of the Hills.

Other than the historical significance, the mountains are covered with evergreen forests. The increasing areas of forests have been cleared for farming purposes. Farm products of the mountain ranges include black pepper, jackfruit, banana, pineapple, Oranges, Tapioca, and other spices. Rice and other minor millets (Foxtail, Finger Millet, and Little Millet) form the staple food of the tribal people who inhabit these mountains. The jackfruit grown on these mountains is well known for its taste and fragrance and is often soaked in wild honey that is also harvested from these mountains. The farm is worth visiting, as Kolli Hills is better known for its medicinal plants than anything else. A wide variety of medicinal plants and herbs are used in Ayurveda and Siddha treatments. The Unani medicine is nurtured, cultivated, gathered, and sent from here to various parts of the city. The mountains are covered by green vegetation in the spring and monsoon and are streaked with streams. There are three reserve forests that are controlled by the Government of Tamil Nadu, namely Ariyur Solai, Kundur Nadu, Pulianjolai.

The forests here are rich and diverse giving importance to both Flora and Fauna. These forests are home to several species of endemic trees and plants. Kolli hills are said to have the largest expanse of evergreen forest in the entire Southern part of the Eastern Ghats. Several coffee plantations, fruit orchards, and silver-oak estates occur in this region. Wildlife such as Sloth bear, barking deer, slender loris, Indian pangolin, jackals, mongoose, palm civet, and many reptiles including endemic species like the lizards and rare non-venomous snake of the family Uropeltidae including the recently discovered Uropeltis rajendrani, Rhinophis goweri, the endangered Python molurus and a number of birds such as Crested Serpent Eagle, Indian Grey Hornbill, laughing thrush are found in Kolli Hills. Among these lizards such as Hemiphyllodactylus kolliensis and Hemidactylus kolliensis are endemic only to Kolli Hills.

Places To Visit in Kolli Hills

The Arapaleeswarar Temple was built by the Valvil Ori, which dates back to as long as the 1st century CE. The place is dedicated to Lord Shiva and is an essential part of Kolli Hills sightseeing, the temple stands as a witness to the excellent Dravidian style of architecture till today. The presiding deity is Lord Shiva. Once devotees started cooking with the fishes found in the pond of the temple. They got life and jumped into the water. As the presiding deity saved the fishes which were cut he is known as Arapaleeswarar.The mountain is a site of pilgrimage, because of the Arapaleeswarar temple, which is believed to have a secret path to the Shiva temple in Rasipuram. This Shiva temple is said to have been built by Valvil Ori in the 1st or 2nd century when he ruled this area. “Arappaleeswara sathakam” is a poem that praises Lord Arappaleeswarar. It is believed that this temple existed during the Sangam period itself. According to legend, the Shiva Linga in the temple was found when a farmer was ploughing his land. It is said that the farmer accidentally hit the Shiva linga while ploughing, and that led blood to ooze out of the statue. The small wound is said to be visible on the Shiva linga even today. 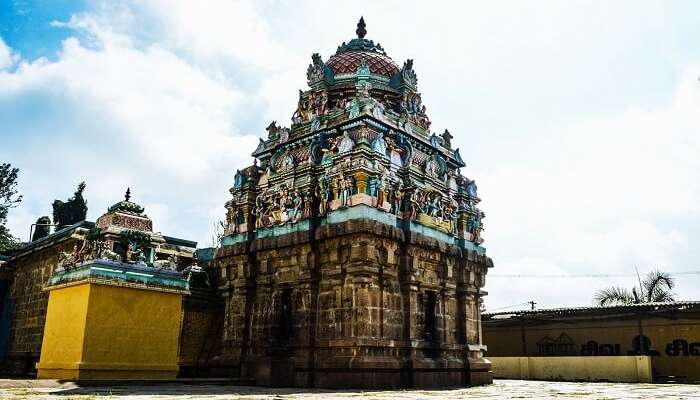 The Botanical Garden is one of the most spectacular places to visit in Kolli Hills. This is situated at a distance of 3 km from Semmedu, Namakkal District, Tamil Nadu. It features a beautiful rose garden, eco-friendly cottages, and a majestic viewpoint, and also a Children’s Park. This wonderful garden can be visited from Monday to Sunday – 8 am to 8 pm. Pets are not allowed inside the premises of the Botanical Garden. This is an absolute must-visit place when one plans to visit Kolli Hills.

The place is located on the way to Vaasaloorpatti while going back from Semmedu. The Farm is famed for being the home to medicinal plants in abundance. This is a beautiful place to roam and relax. It is run by the State Government of Tamil Nadu. Many herbal plants, shrubs, and plants are grown at this farm which is of great aid for medicinal purposes. 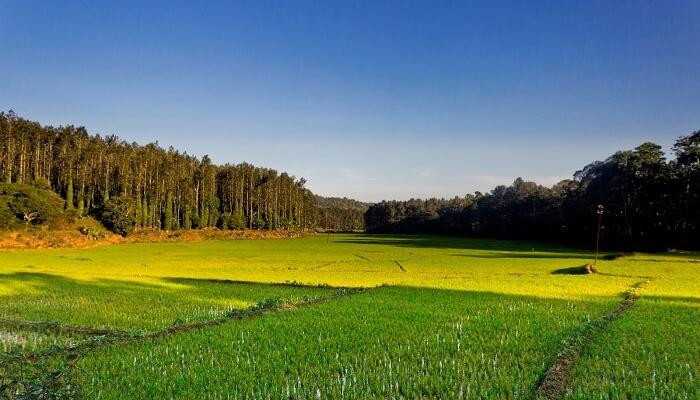 Things To Do In Kollimalai Hills:

1.A Trek to Agaya Gangai waterfall:

Agaya Gangai waterfall is one of the main attractions of Kolli Hills, Rasipuram Taluk, Namakkal, Tamil Nadu. It is a1 km walk down from the sides of the temple. The waterfall has an amazing structure of nature’s beauty and one has to climb down (and back) 1302 steps to reach the falls. The steps are steep and are very tiring which gives a different experience to the travelers. It takes approximately 30 mins to climb down to the falls and 1 hr to climb up back. The waterfall extends from 300 feet in height and gives a spectacular view. There is a pond-like place near the rocks based on the water flow. People need to get into the pond of water to get wet in the waterfall. A rope is tied leading people through the pond towards the waterfall for safety. The visitors are allowed on and off depending on rains and the flow of water in the falls.  There is no entry fee. The place is open throughout the year and welcomes millions of people every day. 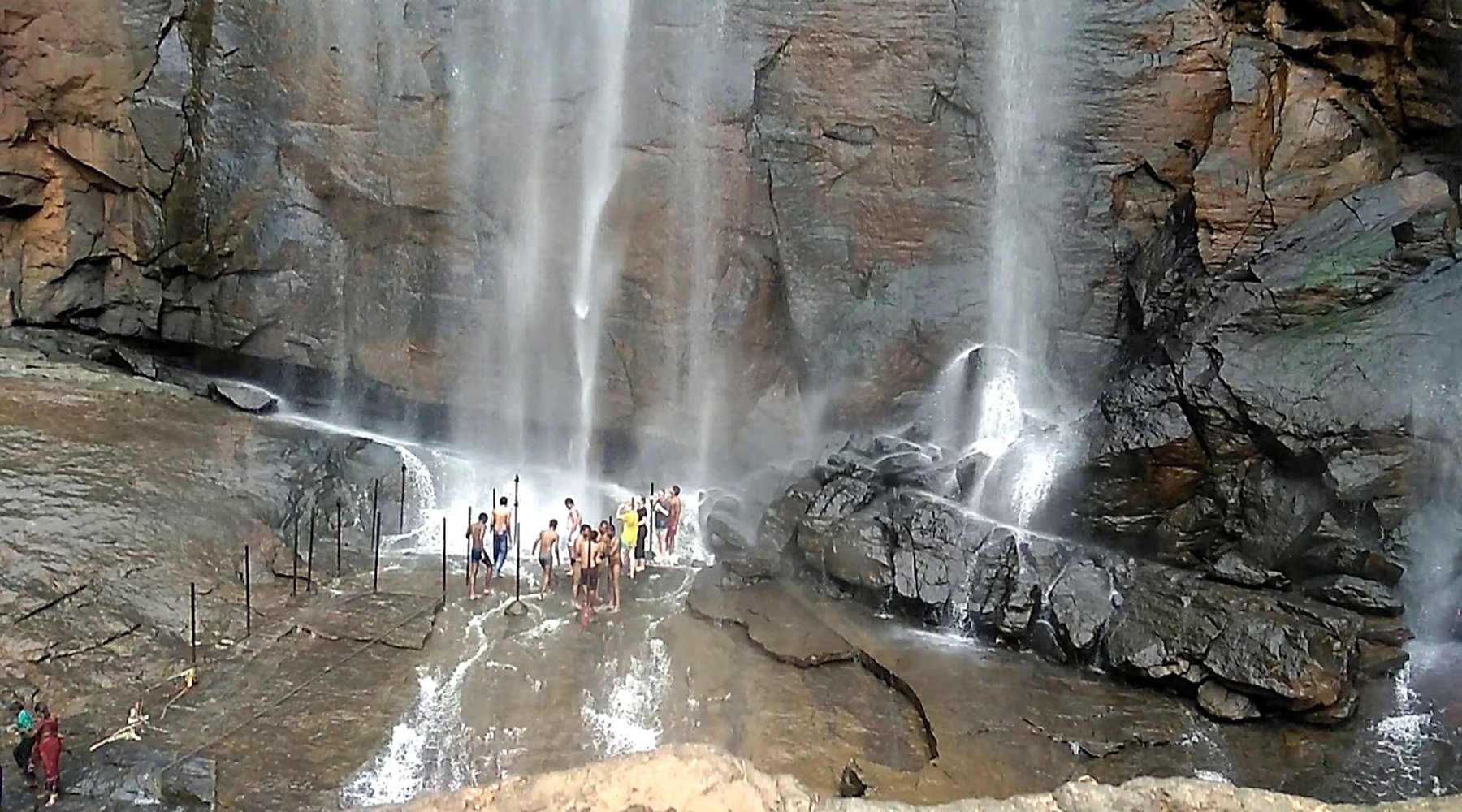 2. A Stroll into The Siddhar Caves:


As a place that holds a spiritual aura, there are lots of beautiful places to explore around Kolli Hills. One such place is Siddhar Caves where only one or even two people are allowed to enter the caves at a time. There are also many medicinal plants that surround these caves in order to give a serene atmosphere to both the body and the mind for the people who come to visit the place.

3. A Ride at Vasalurpatty Boat House :

This is situated at a distance of about 5 km from the city center of Vasalurpatty, Namakkal District, Tamil Nadu. This place is famous for the boathouse that has been built on the artificial lake which is one of the favorite places to visit in Kolli Hills. The pleasant lake is surrounded by the vibrant green landscape of the hills that makes it one of the most wonderful experiences in Kolli Hills. The place is open from Monday to Sunday – 6 am to 6 pm. The entry fee charged is INR 5 per person to experience the magnificent boat ride at Vasalurpatty Boat House. 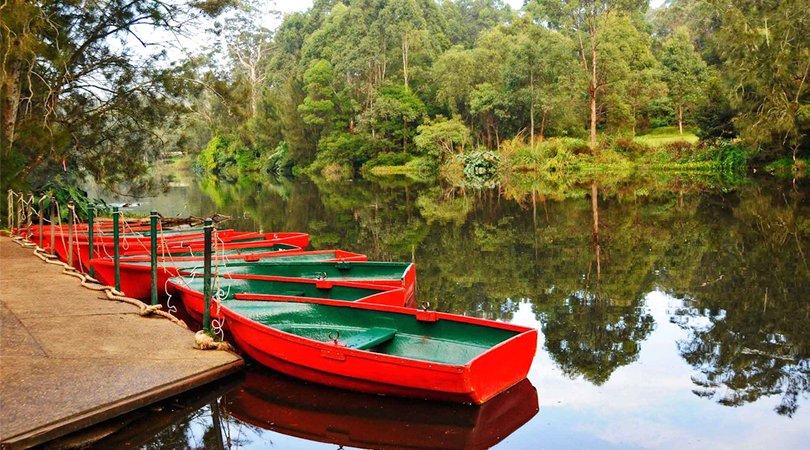 The Kolli Hills are considered to be one of the most amazing tourist spots in Tamil Nadu. It is a place that gives both physical and mental peace to the body and mind. This is a well-recommended place to visit for relaxation on a weekend with family and friends. 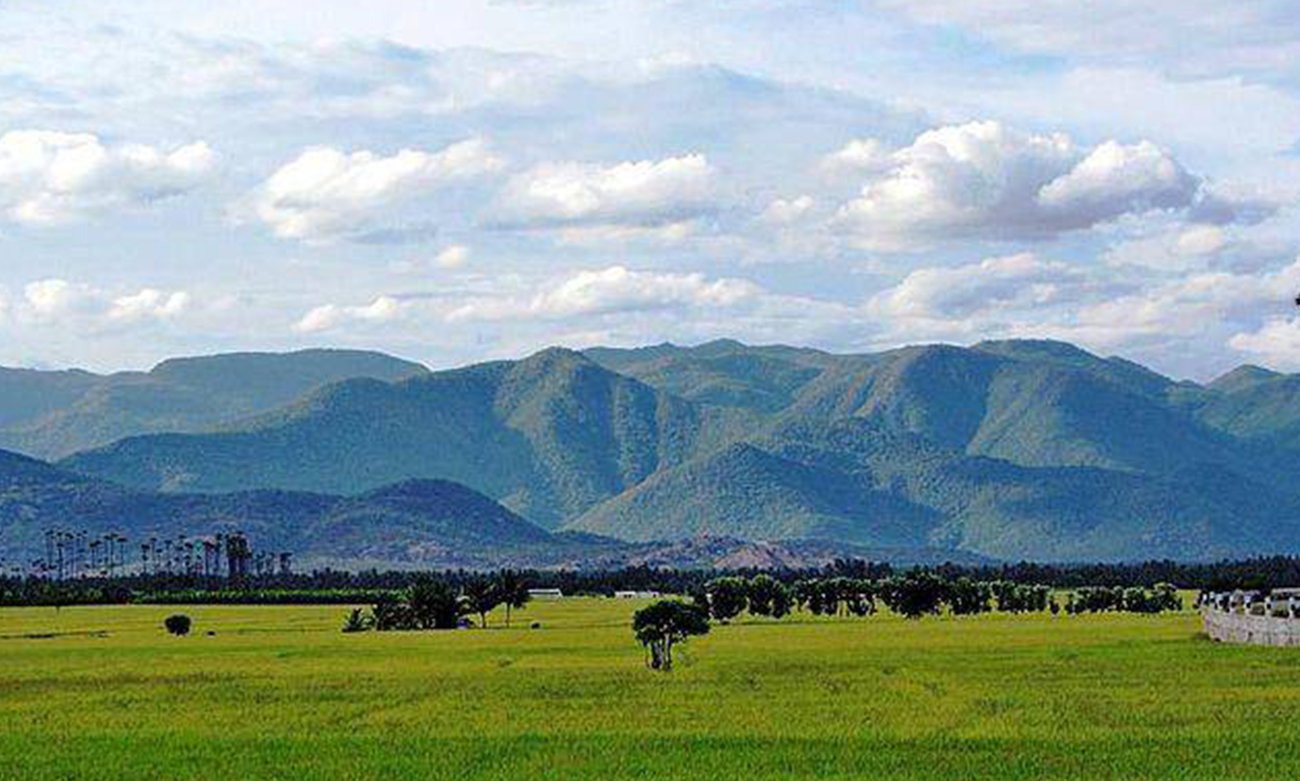 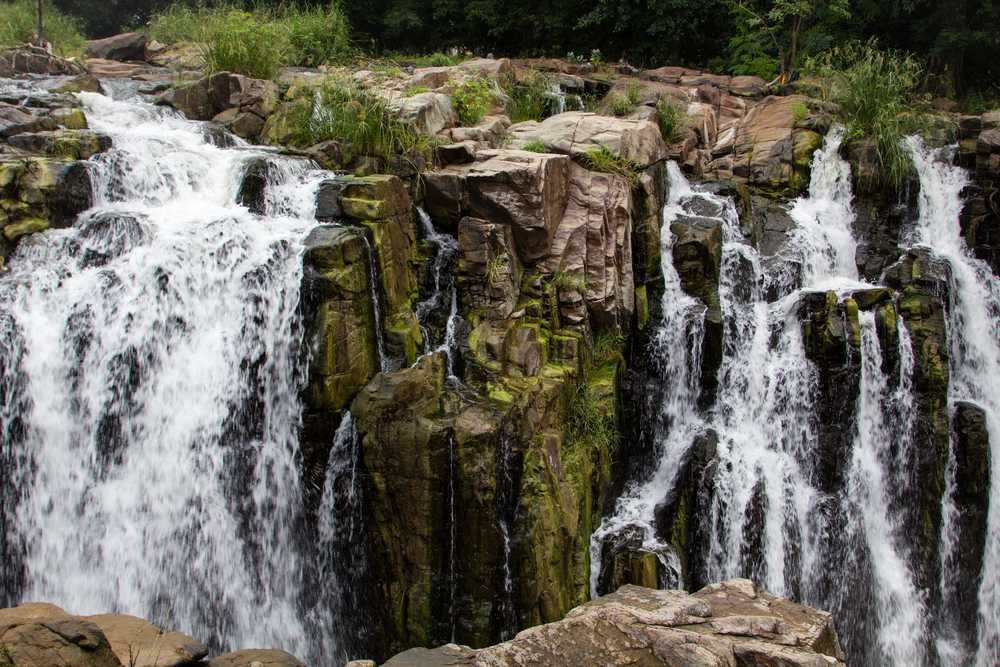