Sabarimala is a great historical temple. For almost three centuries after it was built, which is mostly unreachable. Manikandan, a ruler of the Pandalam Dynasty, found the original path to Sabarimala in the 12th century. He had a huge following, including members of the Vavar family (a Muslim warrior Manikandan defeated). This Prince is described as an Ayyappa Avatar. He is said to have meditated in the Sabarimala temple and reached unity with the divine. Ayyappan Temple Trichy is the most visited spot by all the ayyappa devotees after Kerala.

Ayyappan Temple is one of the most famous temples in Trichy, it is famous for its Cleanliness and peacefulness. Trichy Ayyappan Temple has a lot of plants inside and it’s wonderful to see so much greenery in a temple. It features a large meditation hall where up to 100 devotees can sit for meditation during any time. The temple’s unique quality would be that it treating all peoples equally and without discrimination. This temple celebrates Thirukarthikai during November and December. Visitors from other countries are welcome to visit. 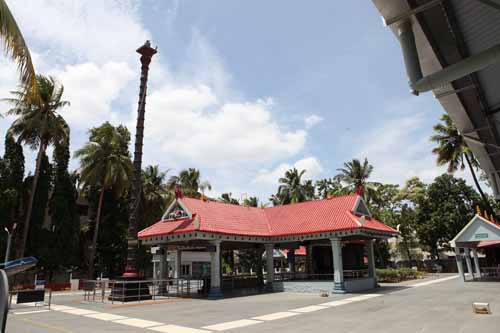 There are also many stone slabs erected with great people’s words on mother etched on it, pooja is often conducted on these stones. Another unique feature of Ayyappan Temple Trichy is that numerous little stones have been collected from holy rivers and holy sites all over the world and have been placed on many small platforms with the names of the rivers and places. It is one of the best places to visit in Trichy and it is believed that having Darshan of this collection of holy stones in one spot will help one overcome difficulties and succeed.

Trichy Ayyappan Temple sangam has set up a couple of stone grinder to help grinding turmeric easier for devotees. The temple provides various services to the privileged and it includes blood donation camps as well as yoga classes. On Sundays, a weekly blood donation camp will be held for six weeks.

Sabarimala pilgrims must walk through the forest to reach the temple because vehicles are unable to approach it. Before going to Sabarimala, pilgrims must be celibacy for 41 days. They must also eat a lacto-vegetarian diet, refrain from drinking alcohol, refrain from using profanity, and leave their hair and nails uncut. They bath twice a day and visit the local temples on a regular basis. They dress in black or blue, do not shave until the journey is completed, and put vibhuti (sandal paste) on their foreheads.